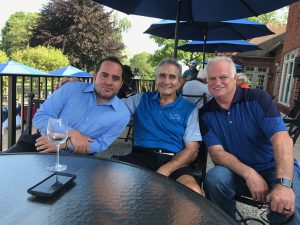 A great man passed today, one of the finest men I ever knew—not just in football, but in life. He did more for me in my career than I can tell you and he did more quietly to help former players than I can say on here. He told it like it is. Blunt, direct, no BS about him. But a warm, generous spirit. Won a world championship in Cleveland then came to Detroit where he was captain for nearly a decade. Excelled at everything he did—as a football team captain, as a spokesman for an airline, in acting, as a radio and TV color analyst, as a golfer, as a CEO and most importantly, as a family man. He and Lem Barney gave me legitimacy in NFL circles and when the NFL HOFers collectively nominated me to run for NFL Players Association Executive Director 5 years ago, that was because Mike Lucci got people like Mike Ditka, Gale Sayers, Paul Hornung and Joe Namath to trust me. How else would a peon nobody ever heard of be able to do that? Looch and Lem. That’s how. I told his son Mike, Jr. this afternoon that his dad enabled me and this firm to help better the lives of many former players and allowed me to make a few dollars along the way, improve my own life. Mike Lucci was one of the NFL’s all-time great middle linebackers but moreover was one of its all-time finest people.