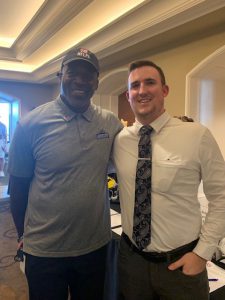 For nearly 20 years, CMDA partner Jim Acho has served as legal counsel to the Detroit chapter of the NFL Alumni Association. NFL Alumni Association President Pete Chryplewicz is a longtime client of Mr. Acho, as are numerous ex-Lions. At the annual dinners, Jim often speaks and provides retired NFL players with updates or changes in the law as it affects retired player benefits. This year’s dinner was held at Pine Lake Country Club. Attending with Jim was CMDA first-year associate Jon Wylie, who is among several CMDA attorneys now working on cases for retired NFL player clients. Jon was welcomed into the fold tonight by many ex-players, including Detroit Lions legend and current Lions radio broadcaster Lomas Brown, who is seen in the photo with Jon.

CMDA remains committed to ensuring that the health and welfare of the players who built the NFL are protected through insuring all ex-players receive the benefits to which they’re entitled.