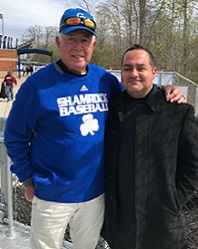 Acho and Moran at dedication of Al Moran Field

On Saturday, May 4, 2019, CMDA partner Jim Acho had the honor and privilege of attending the Detroit Catholic Central High School dedication of its new baseball stadium and Al Moran Field. The field is named for a longtime CMDA client and dear friend of Acho’s, Al Moran, a 1957 graduate of Catholic Central.

Moran is best remembered as the first shortstop in the history of the New York Mets. After his baseball career ended, Moran worked in construction and has coached baseball at Catholic Central since the early 1970s. When Jim and CMDA filed the well-known pension lawsuit against MLB in 2002, Al Moran was one of three lead plaintiffs, and CMDA could not have managed the lawsuit without his efforts.

Al Moran is a great man who has mentored hundreds of young men in the past four decades, and now a great school will forever have his name on their baseball field.