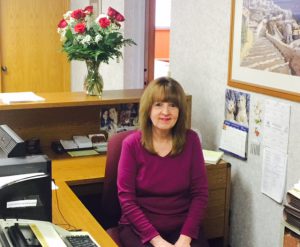 When a friend told Vicki about a secretarial opening at CMDA in 1976, she crossed her fingers and hoped she got the job. She had recently graduated from high school and was looking for a secretarial position in the legal field. Well, Vicki got the job and has been at the Firm ever since.

There were only five attorneys working out of one location (our Livonia office) when Vicki started. Today, over 40 attorneys work out of six office locations. As you can imagine, Vicki has seen the Firm go through substantial growth. Although one thing she enjoys most about her job is interacting with new clients and employees, she admits that the way the firm was 40 years ago could never again be duplicated. The five attorneys and support staff were extremely close friends and considered one another family.

Having worked at the Firm for 40 years, Vicki is clearly a very dedicated employee. When Vicki was pregnant with her second child, she continued to work up until she went into labor… literally. In fact, had the ambulance not arrived when it did, her daughter would have been born in our lobby. Instead, Vicki delivered Heather in an ambulance on the way to St. Mary’s Hospital.  Now that’s dedication.

In 1982 she began working as Bob Blamer’s secretary and has been his secretary ever since. Mr. Blamer explains, “Forty years is a lifetime for some, and certainly the amount of time she has worked at the Firm is a rarity today. The loyalty, kindness and perseverance Vicki has shown over the years cannot be demonstrated in words.”

We are truly thankful and grateful for Vicki’s 40 years of loyal service at CMDA.