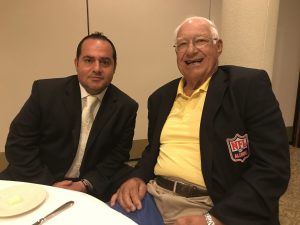 Jim Acho took part in a 60th anniversary tribute luncheon for the 1957 Detroit Lions, the last NFL championship team in this town. The show was hosted by the Detroit Free Press and moderator Dave Birkett, who asked Jim to say a few words.  Jim and CMDA have served as legal counsel to retired Detroit Lions for many years.

Pictured in the photo is Roger Zatkoff, first team All-Pro in 1954 and 1955. Zatkoff’s salary in 1957 was $5,300 and the player bonus for winning the NFL championship was $3,800. Zatkoff took the $3,800 and started a very successful industrial seals business that he still operates today. At 86, Zatkoff also still manages to get in at least two rounds a week at Oakland Hills Country Club.

Look for a major interactive feature on the 1957 team this fall in the Detroit Free Press. Jim was proud to take part in this great tribute luncheon and is proud of CMDA’s association with all retired Detroit Lions.