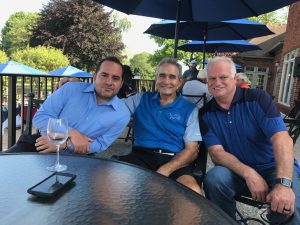 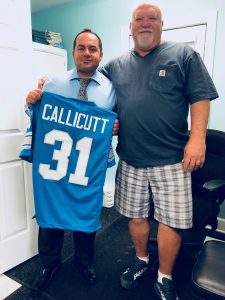 Ken Callicutt was a great college running back, Clemson’s MVP in 1976 and 1977, and MVP of The Senior Bowl in 1977. Unfortunately though, after being drafted by Detroit, Callicutt found himself behind a stable of highly-drafted, superbly-skilled running backs like Lawrence Gaines, Dexter Bussey, Horace King and Billy Sims. Callicutt and Rick Kane–talented backs in the own right–were forced to find other ways to contribute, and contribute Callicutt did in a big way, carving out a niche as one of the NFL’s most dangerous special teamers. Detroit’s Special Teams MVP every year from 1978-1983, Callicutt was a deadly wedge buster, an act that involved kamikaze-like jettisoning of his body head-first into a group of players, often knocking them over like bowling pins, and, while it made Callicutt invaluable, it also ended his career prematurely and has caused him physical and cognitive issues over the past two decades. Callicutt had a successful business career post-football, rising to an executive level at Bally’s (nee Vic Tanny) under Bally’s President Mike Lucci, an ex Lion who knew how intelligent and hard-working Callicutt was. But even Ken’s work career began to suffer, and Callicutt was forced to stop working well before his time. Finally frustrated beyond measure, Ken hired Jim Acho in 2015 upon recommendation of ex-Lions Tom Skladany and Mike Lucci, in order to pursue a concussion claim against the NFL. After countless hours of testing through several respected doctors (namely, Dr. Stephen Schechter, head of neurology at Beaumont Hospital, and Dr. Charles Seigerman, a noted neuropsychologist who has seen numerous military veterans and ex-NFL players through his private practice and through the Eisenhower Center in Ann Arbor) over two years, Ken was diagnosed with severe cognitive impairment.

Jim Acho and Jennifer Richards of CMDA’s Livonia office filed Ken’s claim and assumed that of all the claims they’d filed, this one was a sure-fire winner. Callicutt’s claim was initially denied, though, something CMDA is used to in dealing with NFL concussion cases, but this case was appealed and it was felt this would be a mere formality, since the testing results were so clear-cut. This was a “slam dunk” if there ever was one, according to Callicutt’s doctors. Shockingly, the appeal was denied, and Acho was so incensed at what he viewed was a miscarriage of justice that he took the measure of trying this matter in the court of public opinion. As such, he reached out to HBO Real Sports, who, after reviewing Ken’s case, immediately agreed to do a segment on it along with 2 other players who had been wrongfully denied. One of them, Scott Brantley, is best-known for a hit he put on another CMDA client of Jim Acho, ex-Lions quarterback Eric Hipple. It is considered the hardest hit in NFL history ever captured on film. (CMDA suggests you Google the Brantley hit on Hipple.) The HBO piece on Callicutt and Brantley aired in July, 2018.

Less than one week after the HBO piece aired, the NFL Claims Administrator reversed itself and unilaterally awarded Ken Callicutt monetary compensation for his cognitive impairment. This was (is) heretofore unprecedented in the annals of this concussion class action case. To its credit, the NFL did not object or appeal the reversal of the award. (Acho points this out because the NFL and its lawyers often look for any reason to fight claims, and Acho bases this on nearly 2 decades of representing ex-players in a myriad of issues be it pension, disability, 88 Plan or concussion.) While CMDA is thankful to HBO the question remains: if this piece does not get aired, is Ken Callicutt still left out in the cold? This is why CMDA and Jim Acho continue to fight for ex-players..so that eventually nobody who built the game is left out in the cold.

Jim Acho wishes to thank: Jennifer Richards, Julia Callahan (paralegal extraordinaire), Dr. Steve Schecter, Dr. Chuck Seigerman, Lisa Cruz and ex-Lion Eddie Murray (the Detroit Lions liasions for ex-player issues), Mike Lucci for his never-ending support of all ex-players, Eric Hipple for always being there to help ex-players (and military vets) with anxiety, depression and PTSD, HBO Real Sports Producer Evan Burgos, Mary Callicutt for being a rock of gibraltar for her husband, Kyra Callicutt and Ken Callicutt, Jr. (and his better half) for being a tremendous support to their dad, and of course Ken Callicutt himself for being a courageous man in the face of adversity. Keep on keepin on, big man!