Department of Education and Transgender Facilities

Department of Education and Transgender Facilities 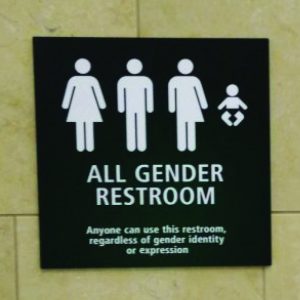 May 13, 2016 the U.S. Department of Justice and the U.S. Department of Education issued a “Dear Colleague” letter to all schools in the country receiving money from the federal government directing that “when a school provides sex-segregated activities and facilities, transgender students must be allowed to participate in such activities and access such facilities consistent with their gender identity.” Gender identity refers to an individual’s internal sense of gender.  A person’s gender identity may be different from or the same as the person’s sex assigned at birth.  The Department of Education says schools cannot require a medical diagnosis or other documentation to prove transgender status.

Although the “Dear Colleague” letter is not a congressional statute, executive order, or even a regulation, it is a directive that the federal government refers to as “significant guidance.”  School districts, including the country’s 16,500 public school districts, post-secondary colleges, 7,000 universities and trade schools, charter, and for-profit schools are now on notice regarding how the federal government interprets Title IX, the 1972 law that prohibits sex discrimination in education, as it relates to the rights of transgender individuals.  As a condition of receiving federal funds, a school must agree that it will not exclude, separate, deny benefits to, or otherwise treat differently on the basis of sex any person in its educational programs or activities unless expressly authorized to do so under Title IX.  The “Dear Colleague” letter noted that as consistently recognized in civil rights cases, the desire to accommodate others’ discomfort cannot justify a policy that singles out and disadvantages a particular class of students.  The directive carries with it the implied threat that failure to follow the federal government’s interpretation could result in the loss of federal education funding.

The directive noted that when a school provides sex-segregated activities and facilities, transgender students must be allowed to participate in such activities and access such facilities consistent with their gender identity.

From a practical standpoint, the directive states that schools cannot require transgender students to use their own private bathrooms unless it does the same for all students.  A school may come up with alternate facilities, for example a single-user restroom, as long as these options are available for all students who voluntarily seek additional privacy.  Other practical solutions could include putting up curtains in locker rooms for more privacy or allowing differing schedules by transgender students to use facilities as long as these differing schedules are not required.

Additional considerations addressed in the directive include that teachers and staff cannot use a transgender student’s birth name or pronoun and school records must reflect the student’s chosen name and gender identity.  Schools with sex-segregated accommodations for overnight field trips must allow transgender students to sleep with students of their chosen gender.  Schools may offer single-occupancy sleeping rooms, but transgender students may not be required to use them unless all students have access to them.  Athletic teams are allowed to segregate by sex, as long as they provide equal opportunity for both sexes.

zabeth Rae-O’Donnell is an attorney in our Livonia office where she concentrates her practice on municipal law, employment and labor law, and education law.  She may be reached at (734) 261-2400 or erae@cmda-law.com.