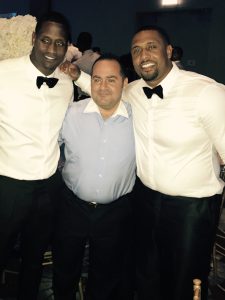 Jim Acho has been LaMarr Woodley’s attorney since he turned professional with the Pittsburgh Steelers. Today LaMarr is retired after an All Pro career and has turned his attention to Hollywood and acting and producing. LaMarr filmed six episodes of a TV show he hosts called “Tackle My Ride,” which aired this year on NFL Network and Spike TV. The networks have ordered the show for two seasons and LaMarr will start filming very soon, in addition to hosting his weekly radio talk show on 910 AM in Detroit.

In the photo, LaMarr is on the right and fellow CMDA client (and groom) Prescott Burgess is on the left. Jim attended Prescott’s wedding on Saturday, June 24, 2017 in Chicago, where LaMarr served as Prescott’s best man.  Jim says, “I’ve known both of these men since they were 18 years old and to see the type of men they are today – great husbands and fathers and compassionate, civic minded people, it’s truly heartening. I’m proud of our association with Wood and Prescott on a business level, but far more proud on a personal level.”