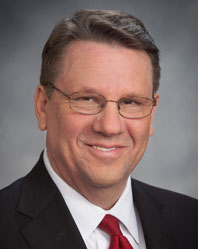 Mr. Blamer assists clients with many types of negligence actions, workers’ compensation claims, and social security claims. He has handled, resolved and taken to trial many cases over his career of over 35 years with tremendous success, not only in Michigan, but throughout the country. His trial experience includes automobile negligence, trucking cases, premises liability, complex professional negligence, products liability, complicated plane crash matters, commercial litigation, police misconduct, Road Commission cases where allegations include improper highway design.

Mr. Blamer’s personalized approach involves spending time with clients. He asks deep questions and actively listens. He offers honest legal advice that fits each client, each time. He is invested in every client he represents and will fight for you. Mr. Blamer’s drive to educate himself so he can effectively cross-examine the experts hired by his opponents is a key element to his success, whether it is learning to fly so he can effectively take on the FAA in a plane crash case or employ his skills as an experienced scuba diver in products liability actions against dive manufacturers for defective equipment. His clients truly appreciate his compassion, effective communication, and thoroughness. Mr. Blamer firmly believes that preparation and communication are the keys to his success.

A few of Mr. Blamer’s recent cases are highlighted below.

Jane Doe vs. ABC Insurance Company
Mr. Blamer originally represented this client when she was ejected from a van in which she was a passenger in 1998. The Plaintiff sustained a fractured spine for she had multiple reconstructive surgeries. Blamer resolved the claim against the original driver for policy limits, which were substantial. In 2012 the No-Fault carrier stopped paying benefits for attendant care. The Plaintiff recovered all benefits due and the insurance company agreed to continue to pay the Plaintiff attendant care for the rest of her life at a rate that included an inflationary factor every year to increase the hourly rate. It is one of the few cases handled where insurance companies have guaranteed to pay attendant care in the future.

Jane Doe vs. ABC and DEF Insurance Company
Mr. Blamer handled a No-Fault Benefits case for the decedent’s family seeking survivors’ loss benefits. Two insurance companies, as they often do, were fighting over whose responsibility it was to pay benefits and, as a result, no benefits were being paid. Mr. Blamer won at the trial level, and Defendants appealed. Plaintiff’s estate won at the Court of Appeals level and the family was also awarded attorney fees because the responsible carrier’s denial of benefits was found to be unreasonable. The Supreme Court kept intact the award of 100% of benefits, attorney fees, and the penalty interest so the family recovered in excess of the entire benefits due.

John Doe vs. Security Company and ABC Bus Line
Blamer recently obtained a settlement for the Plaintiff in Tennessee who suffered an unjustified attack and illegal detainment by a security guard company at a bus terminal. Despite there being no real physical injury, there was a sizeable award for punitive damages against the security company.

John Doe vs. John Doe 2
Plaintiff was struck from behind on a local expressway by a person who was distracted by a motorcycle accident on the side of the road. Mr. Blamer and his client received a jury verdict valued at more than 10 times the insurance company’s offer before trial.

Jane Doe vs. FGH Insurance
Plaintiff fell and struck her head while unloading a motor vehicle. She had a serious head injury, but because of a lack of funds, she was placed in a nursing home that would accept Medicare. After placement in that facility Plaintiff’s children talked to Mr. Blamer and he filed suit against the auto carrier and obtained summary disposition at the trial court level holding that the carrier owed coverage, including reasonable payment for a care facility. The Plaintiff at the Medicare facility was unable to communicate and received virtually no medical treatment. As a result of the successful court decision, Mr. Blamer aided the family in placing the victim in one of the finest neurological rehab centers in the country. As a result of that placement, she received actual medical treatment and was restored her ability to communicate, eat on her own, and have interactions with her family. One of the greatest joys of Mr. Blamer’s career was visiting with her at the rehab center.

John Doe v John Doe Municipality
Mr. Blamer was successful in establishing the Plaintiff’s claim for millions of dollars was fraudulent resulting in no recovery for the Plaintiff.

John Doe vs. ABC Township
Plaintiff alleged he was brutally attacked and beaten by Township police officers. After several days of trial the jury returned a No Cause verdict in favor of Mr. Blamer’s police officer clients and the Township.

Jane Doe vs. Jane Doe Driver, ABC Workers Comp Carrier, and DEF No-Fault Carrier
The Plaintiff was injured while operating a school bus in the course of her employment when a vehicle driven by the negligent Defendant negligently suddenly pulled into the Plaintiff’s lane striking the school bus and injuring the Plaintiff’s hand. Mr. Blamer brought claims not only against the negligent driver, but against the No-Fault carrier, and workers’ compensation carrier as well. Mr. Blamer has experience, paralleled by few in this State, handling both liability claims and workers’ compensation claims. As a result of his experience, he was able to resolve all cases and claims against the Defendants satisfactorily including an award for excess wage loss paid by the No-Fault carrier for past and future benefits.

John and Jane Doe vs. ABC Truck Hauling Companies
Mr. Blamer has been involved in cases and mock jury trials obtaining verdicts in excess of $25 and $35 million dollars in order to convince the Defendant and its multiple insurance carriers to resolve the claim for an eight-figure settlement.

Jane Doe, Minor vs. John Doe, Driver, and John Doe Company
Mr. Blamer and CMDA have handled hundreds of cases involving substantial injuries that often times result in structured settlements. Of all those cases, one sticks out where the minor child sustained serious head injuries as a result of the negligent driver. Not only was the minor child given medical treatment for the rest of her life, including placement in appropriate institutions for her care as necessary from time to time, but also obtained a settlement against the John Doe driver and the company for which he worked that guaranteed payout of over $26 million dollars through the course of her life.

John Doe, M.D. v. John Doe Manufacturing Co.
In this New York case, Mr. Blamer sued and obtained a sizeable settlement against a manufacturer for his client when exercise equipment malfunctioned causing the victim, a medical doctor, to severely injure his back resulting in multiple surgeries.

Jane Doe v. John Doe Premises Owner
In this Wayne County case, the jury awarded what is believed to be the largest verdict of its time in a premises liability award for a fall on ice in the employer’s parking lot. Over 15 doctors testified in the case regarding causation and treatment for a condition that was not diagnosed until two years after the fall.

Estate of Jane Doe v John Doe Bar, et. al.
In this Dram Shop/Liquor Liability Trial, the jury awarded a very sizeable award against the liquor establishment who served a patron to the point of intoxication, which the jury found led directly to a bar fight during which the victim suffered a heart attack and died.